The morainic hills of the Basso Garda (whose heights oscillate between 100 and 250 meters above sea level) are wedged between the Po Valley (Province of Mantua) to the south and the north of Lake Garda (Province of Br
escia and Verona) to form a semicircle that spans the southern shore of Lake Garda. Formed following the phases of expansion and retreat of glaciers they are characterized by patches of forest, gentle slopes alternating with plains, lakes and springs, vineyards and olive groves. The moraine hills are inhabited since the Neolithic period and the surrounding area, many tourist proposals from those purely cultural (medieval villages, castles, museums) and landscape (hiking, horseback riding and biking) in the folklore (pageants, country fairs, music events). countless

cultural attractions starting from the historical evidence left by the Etruscans and Romans, later in the Renaissance from the famous Gonzaga family right here in the cool of the mild climate of the hills loved to retire and testimonies of more recent historical events, such as the battles of the Risorgimento of Solferino and San Martin, and the institution of the birth of the International Red Cross.

The village stands on a hill, overlooking a small lake in the shape of heart. All around rise the hills of the morainic amphitheater of Garda, a few kilometers from the lake shore.
The current Castle Castellaro dates back to 1100-1200 and owes its origin to the Scaligeri, even if, because of its strategic location, border was soon involved in disputes between Verona and Mantova, finishing in possession, from time to time , the Visconti, Gonzaga and of the Serenissima Republic of Venice.
Built on a natural hill north of the small lake, the castle, defended by massive crenelated walls and ten towers, 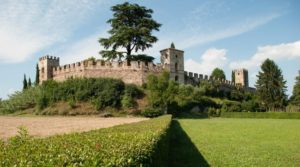 he had divided into two zones: towards the lake entrusted to the castle and the north entrusted to a captain with the task of defending the drawbridge entrance to the castle and to the fortified village.From the ancient castle remain, still almost intact, the walls, four towers, some sections of the walkway and two rustic medieval houses.In 1600 the castle lost its defensive construction characteristics and was ceded by the Republic of Venice to Arrighi Counts that too without changing the outward appearance, he transformed a part in comfortable and stately residence.